I recently signed a petition calling for natural history to be a compulsory part of the national curriculum. It wanted more to be done to help young people re-engage with wildlife and the living world around them, saying “It is vital to understand the contribution nature makes to our lives physically, culturally, emotionally and scientifically both in the past and today.”

Discussing the issue brought back memories of my very favourite times at primary school: the Nature Walks. The teacher led us along footpaths, through woods, and alongside streams, encouraging us to scramble about and find things. Any things. We’d call her over to tell us about whatever had grabbed our interest, thereby learning botany, geology, ornithology, meteorology, mycology and a whole load of other ologies covering all living things and some dead ones.

We’d troop back to class carrying feathers, pine cones, owl pellets, conkers, pebbles rodent bones and other treasures, to be laid out on the Nature Table.

Even now, more than 50 years later, I’m fascinated by the tiny finds on a walk as well as the views and the adventure of the journey.

The pheasant feathers above were collected on a section of Isaac’s Tea Trail that I’ve now done several times. Each time the North Pennines views are different, modified by season and light, and there are always surprise finds along the way. Walking with a friend and using two cars, we began at Ninebanks and finished near the River West Allen at Whitfield.

The restored hearse house at Ninebanks was certainly full of surprise finds. 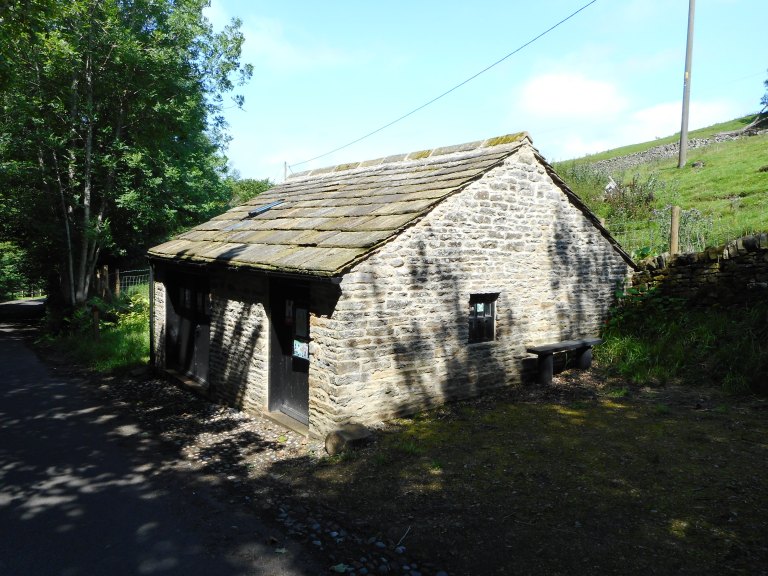 In Victorian times it garaged the community hearse paid for by Isaac Holden – the Isaac of Isaac’s Tea Trail. He was a grocer from Allendale who sold his tea door-to-door around the remote farms and hamlets of the area. At the same time he raised money for numerous social projects, including providing a horse-drawn hearse in response to a demand for improvements to burials and to cope with the aftermath of diseases.

The building was falling into dereliction before it was restored using Heritage Lottery funding awarded to the North Pennines Area of Outstanding Natural Beauty Partnership for their Allen Valleys Landscape Partnership Scheme.

Today the little two-room building serves as a shelter for walkers and a mini museum of curiosities associated with the area’s history and with tea-drinking.

From the Holden Hearse House we set off through the graveyard of St Mark’s Church and up a farm access road. A steep uphill is not my favourite start to a walk, but this ascent gives such wonderful views that I can forgive it anything.

The climb continued up a field to a ladder stile, then the route leveled out at Pasturehead. This plateau is a bit boggy, which makes it a brilliant nesting area for moorland waders. I was last here in the Spring (see blog entry April 22nd, ‘So Many Possible Permutations’) and saw dozens of curlews and lapwings revving up for their breeding season. Passing through in late July I hoped their chicks had thrived.

Isaac’s Tea Trail is waymarked with pictures of Isaac looking very solemn, but there are many quirky markers that raise a smile.

From Pasturehead there was a knee-knackering descent to the narrow stone bridge over the Dry Burn (which is actually very wet whenever I see it it), to my regular lunch spot at the next ladder stile (the very same lunch spot used by Clare Balding and Radio 4 producer Lucy Lunt when we walked this section for their programme ‘Ramblings’ – see blog post of January 27th).

Lunch and name-dropping over, we continued across grassy pasture to meet a stony track. This took us past a couple of derelict farmhouses which must have been substantial farm operations in their day. I always long to know the stories of the people who lived and worked in the abandoned buildings that are dotted around the North Pennines.

A little further along the track, our grown-up nature walk gifted us an ornithological gem – a young family of wrens on possibly their first excursion from the nest. There was much chirping as the youngsters were persuaded to flutter from a clump of rushes to a stone wall, then make short experimental flights along its length.

On the mycological front, we saw a sinister group of shaggy ink caps, dripping black spores and starting to dissolve themselves.

Perhaps the stars of our botanical sightings were the harebells, their pale blue papery petals looked so delicate yet they’re tough enough for upland conditions and continue to flower into autumn.

Unlike my school nature walks, this route also covered the subject of marketing, with the vintage tea adverts attached to gateposts and stiles. Truly an education and an inspiration. 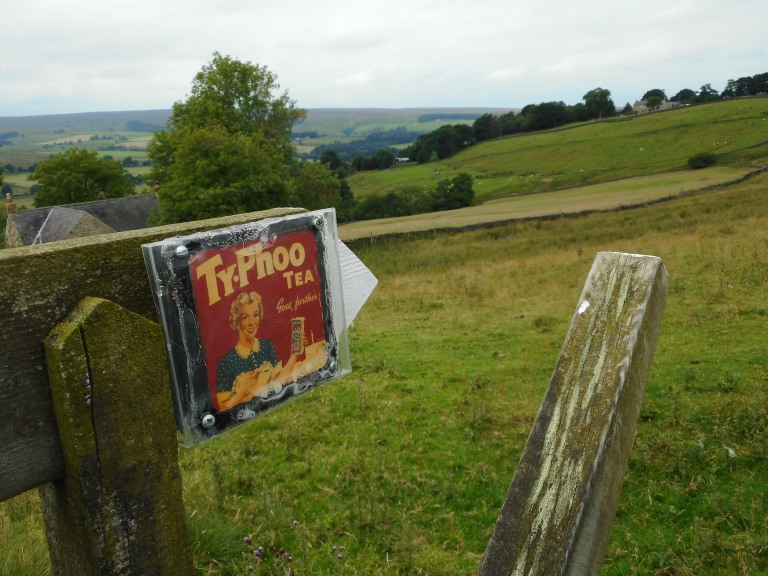 The maps of the routes covered in the blog are only intended for general guidance. Please use OS Explorer Map OL43 Hadrian’s Wall for this walk.