Two eight-year-old girls, Isla and Anja, have walked Isaac’s Tea Trail to raise money for Allendale May Fair, accompanied part of the way by friends as young as six. They completed the 36-mile route in three days and have raised around £600.

Coping with chilly November showers, a bull, and a broken bridge, Isla and Anja carried their own rucksacks with food, water and dry clothes.

Walking with them were their their mums who are both closely involved in community and outdoor projects in Allendale. Jane Pryde is the Project Manager for Higher Ground, which is developing the former First School in the village as a social enterprise using  horticulture to improve mental health and wellbeing. Linda Beck is the Managing Director of the outdoor adventure company BECKs Training.

Jane says they had considered camping, but decided instead to be picked up at the end of each day, then driven back to the same point to start the next day. Walking the circular trail anticlockwise, their first day was 13 miles from Allendale to the A686 at Clargillhead. Anja’s six-year-old brother Sam was with them most of the day, walking 10 miles.

At the start of  Day 2 they were all still smiling, with Linda’s dog Skyla keen to get going on another long walk.

Soon after the hamlet of Ayle the group took a detour to avoid a bull in a field, adding to their planned distance, but happy to reach the banks of the South Tyne for their picnic lunch. They were so busy tucking in to their food that at first they didn’t spot the shattered footbridge (see blog post September 25th ‘You Shall Not Pass’). Jane says they tried to wade the river but it was too cold and slippery, so they had no option but to phone for a lift to Alston. In a cafe they needed that well-known morale booster hot chocolate to fuel them for the walk to Nenthead.

Jane says walking the Tea Trail turned out to be very educational, as the children talked about what they’d observed along the way. They also discussed Isaac Holden, the Victorian grocer from Allendale who delivered tea to his customers in remote farms around the North Pennines. Like Isla and Anja, he used his travels to raise money for good causes in the community.

Their final day on the Tea Trail was from Nenthead to Allendale along the Black Way. 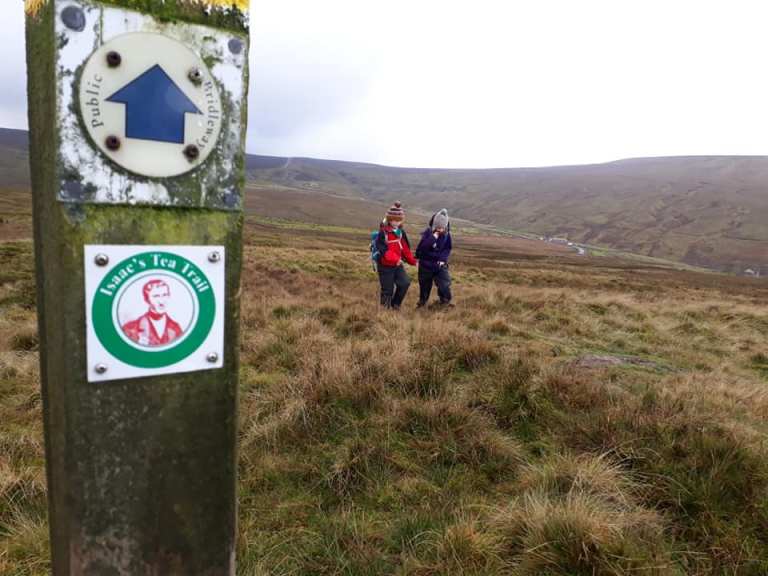 Jane says the children were still smiling at the end of the walk, and even had the energy to march up the steep hill into the village with ‘Eye of the Tiger’ playing on a phone. Isaac Holden probably sang Methodist hymns as he walked, but he would have appreciated what the young team had achieved.

All pictures by Jane Pryde and Linda Beck

One thought on “FOLLOWING IN ISAAC’S FUNDRAISING FOOTSTEPS”