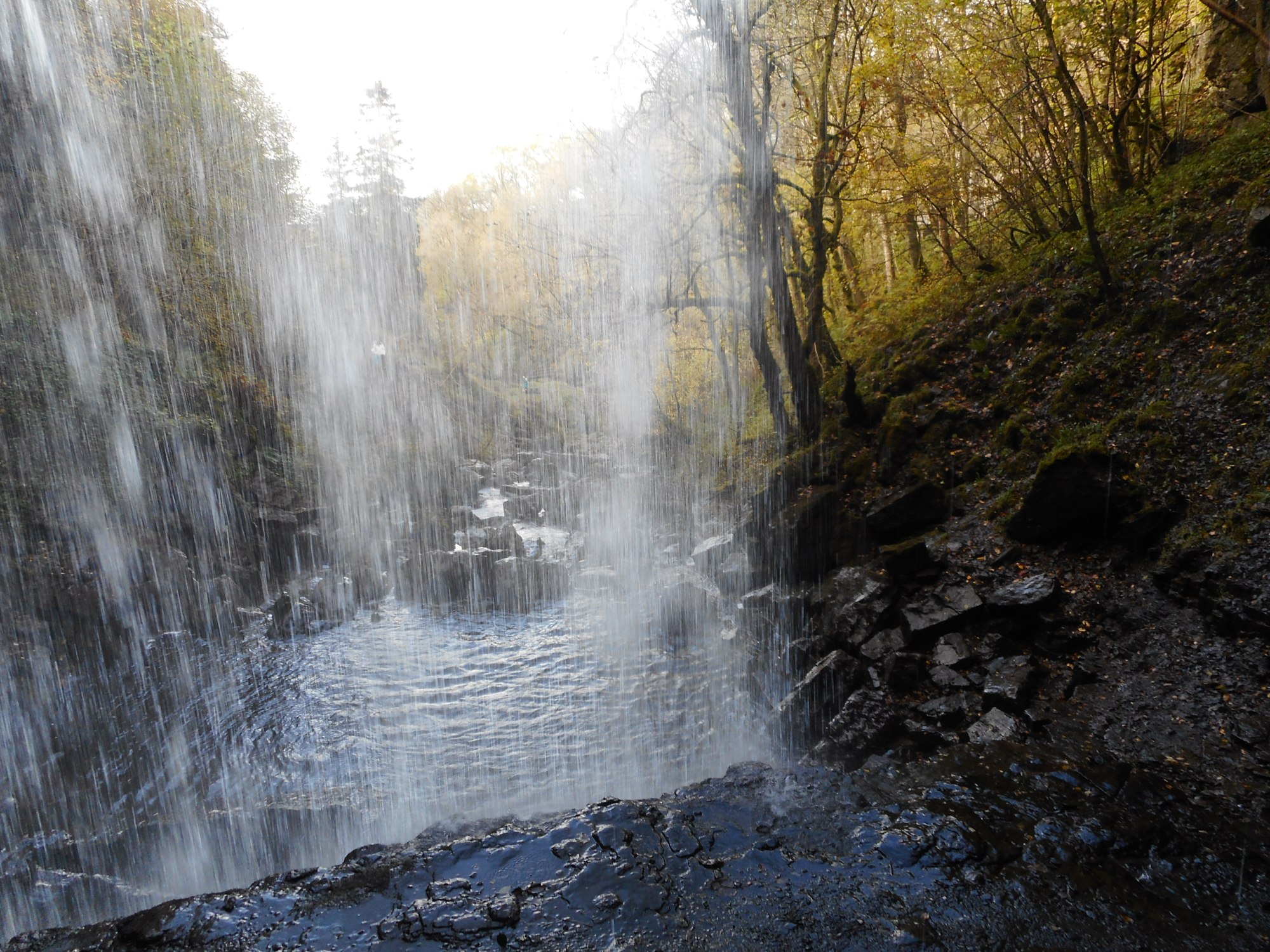 It’s said that witches can’t cross water, so maybe the safest place to be on Halloween is behind a wall of water? Actually, forgetting all superstitions, one of the best places to be on any day is behind Ashgill Force.

The waterfall is south of Alston, near Garrigill. It’s not on Isaac’s Tea Trail but is around  three miles from Nenthead and Alston so it’s safe to assume Isaac Holden would have spent time in the area. He was a familiar figure across the North Pennines as he sold tea door-to-door while raising money for good causes in the mid-19th century.

Our walk began in Garrigill, where a red squirrel was scampering along the pavement,  crossing and re-crossing the road with the confidence you would expect from the figurehead of the Tufty Club. Leaving the village we (Christine, Nuala, myself and dogs Dora and Dottie) walked up a slippery stony path until we reached a path in front of a row of cottages, their garden walls decorated with crystals and minerals unearthed during lead mining.

Having gained height we also gained amazing views across the South Tyne valley and could clearly see the old Corpse Road climbing westwards from Garrigill. Appropriately for Halloween, this dates from the days when there was no consecrated ground for burials in the area so the dead were carried almost ten miles over the Pennines to the church at Kirkland. There are stories of burial parties encountering blizzards and having to abandon the coffin on the hillside until it was safe to return to it and continue the journey.

The Corpse Road is now part of the Pennine Way and by some accounts one of the most hated parts, a long, long stony track frequently described as ‘endless’.

For us though, we had a lovely, almost level grassy path ahead of us. But the dozen stone walls between the fields presented a dozen different and tricky step stiles. Some had  small gates on top of them, others had extra barriers such as wires and upstanding stones, most had slippery footholds. A time to remember the golden rule of rock-climbing and always keep three points of contact with the rock. I’d have felt reassured by ropes, carabiners and a belay braking device but we only had two dog leads.

Eventually we reached the deep valley of the Ash Gill and turned to walk upstream beside it, with a succession of mini waterfalls and rock pools as the support act before the main event of Ashgill Force itself. It cascades more than 50 feet as it emerges below an arched road bridge.

The gorge frames the scene perfectly, also enhancing the sound of the water and the pummelled moisture in the air to create an intense experience.  I’ve been here when the river level is much higher and the waterfall a churning, foaming roar with a huge veil of fine spray. On such days I wouldn’t attempt the slippery path to the rock shelf behind the waterfall, but when conditions are safer it’s an amazing experience to stand behind Ashgill Force.

We emerged completely dry and very exhilarated. It’s a place where you feel close to nature, yet in Isaac Holden’s time this would have been an industrial centre. We saw the barred entrance to a lead mine beside the waterfall, the stone walls of the bouseteems where miners stored their unprocessed ore and the washing floor where children crushed the ore with hammers to extract the lead.

Reluctantly turning our back on the waterfall we followed the gill downstream to see it flow into the River South Tyne, where we also turned north and walked along the wooded riverbank. Again Halloween came into our conversation as we passed a tree infested with witches’ brooms.

The spooky links continued to haunt the final half mile of our walk as we reached the Corpse Road.  It leads up to Cross Fell, the highest point of the North Pennines, once known as Fiends’ Fell because it was said to be inhabited by demons. After St Augustine had blessed the fell to drive them out, and erected a cross, it became Cross Fell. Our route merely passed the junction where the Corpse Road joined the minor road into the village, but Nuala still had enough energy left to scamper up it for a photo looking back across Garrigill to the valley side we had traversed on our outwards route. 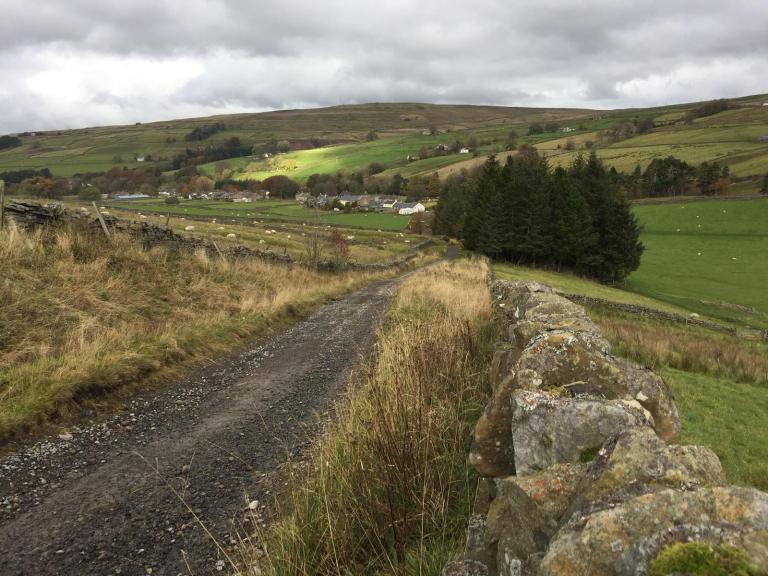 Reaching the centre of the village we rested on a bench outside the pub, now closed. According to a report in the Cumberland and Westmorland Herald in 2008, the building is haunted by a servant girl and a former landlady.

There are so many links to the past, and even the paranormal, on this walk, but as a present-day experience it had a powerful magic that’s hard to beat.

2 thoughts on “NO TRICKS – JUST TREATS: Garrigill and Ashgill Force”